Last year was a decent year on some levels from a personal perspective but with the depressing political situations at both home and abroad I’ve struggled to find positive things to blog about and sadly I didn’t get nearly as much done on the allotments as I would like. But 2017 is now gone…and the turning of the year is a good point to review and plan to do some things differently.

So here’s to 2018 and new opportunities. My only resolution the the last decade or so has been “have more fun”  but I’ve decided on a few guidelines for the coming year. There’s also a word for the year – GROWTH – which neatly encapsulates a lot of the things I’d like to do.

In between posts about the allotments (which will be more regular) I hope to post a monthly update on the above – if only to keep me accountable!

Here’s to all the magnificent bold, brave, staunch women who came before – to the women of NASA celebrated in the recent movie Hidden Figures, to female scientists of the past (and not I hope the present) whose work was co-opted by others.

Here’s to the women who set an example and blazed a trail whether knowingly or not – to  the Madame Ching’s of this world – an astonishingly successful Chinese pirate who lived long enough to retire – the Ada Lovelace’s.

The scientists, dreamers, programmers, explorers, nurses, doctors and the witches and wise women throughout history.

In my own family to the bolshy, brave and sometimes quiet women who hung in there and got the job done, and who’ve encouraged all their children to dream and dream big.

And to the little girls who’re coming after – to the ones who’ll build on the successes of the past and change the world again.

My Twitter feed has been one long scroll of horror since 20 January (with some gloriously bright spots such as the millions around the world who took part in the Women’s Marches and the lovely Americans crowding the streets at every opportunity to protest the latest idiocy proposed by Trump).

At the moment the cockles of my cynical heart are being warmed by the numbers of immigration lawyers who have turned up at multiple airports to offer pro-bono advice and try and pry names and details out of CBP staff; the variety of Congress people turning up to support that and the judiciary who have ruled the ‘muslim ban’ as illegal.

I couldn’t do the Women’s March last weekend but in the spirit of Doing Something rather than just amplifying as many voices as possible here’s a partial list of actions I’m putting in place.

a) Signed this petition to limit any visit by Trump – and I’ll be out on the street protesting the moment his toes touch the ground.

b) Attending the Emergency Protest at Downing Street tomorrow night with a pal.

c) Signed this letter ‘from the world’ to dearest Donald letting him know that 3 million of us (and counting) don’t like him one little bit. Sometimes it’s the little things and when you’re dealing with a man that vain there’s something comforting in 3m+ people rejecting him and everything he stands for (on top of those who did a rousing job doing just that last weekend).

d) Letters sent to local councillors and local MP asking pertinent questions and for their reassurance on their positions on a number of key issues.

e) Emailed 10 Downing Street asking whether May really wants to go down in history as the Neville Chamberlain for this decade.

f) Donated to Kal Penn’s amazing fund raiser (US actor who also worked for the Obama administration) who opened what he thought might be a little fund raiser after some twit told him he didn’t belong in America.  It’s currently @ $407,000 and rising by the second.

h) Trying to track down a useful blog post an American pal made about how non-Americans can donate to groups like the ACLU and other civil liberties orgs without jeopardising their status in the US.

It’s a start.  Diary dates for coming months – possible further march next Saturday, then two in March – one for preserving the NHS against all incursions and one an anti-Brexit march.

Interesting article from GoCompare on money leaks and how they average out to £360 per person per year on the UK.

The UK wastes a whopping £17.6bn a year by letting money leach away on takeaways, snacks, coffees, ready meals and items and services which aren’t used – that’s an average of £360 of unnecessary spending per person, per year.

Takeaway meals, paying for lunch or snacks at work and unused TV subscriptions all come high in the list.  It’s definitely worth taking a quick look at the article for the top 20 money leaks.

Gentle reader have been guilty of many of these in the past – but getting back into the gym in 2014 meant that I totally vanquished my takeaway habit (down to 3-4 times a year rather than 3-4 times a week) and increased my cooking at home from lovely fresh unprocessed ingredients (thus killing off another item on the list – buying too many ready meals).

Unused subscriptions ceased to be a problem once I started adulting like a boss and reconciling my bank accounts monthly .

However I still have some slightly guilty (from a position of fiscal responsibility) habits including:

I’m getting better at the whole lunch prep – especially as knowing what I eat helps with achieving my gym targets.  I can certainly afford the coffee and lunches out – I just need to keep an eye out to make sure they’re the occasional treats rather than a daily thing.

One thing that helped me get a grip on spending over the last two years was making my unit of calculation either PT sessions with the lovely PT  or things for the allotment.

I’ve found it far easier to balance wants and needs when framing it that way.e g. if I have an ITSU lunch every day this week that equates to 1 PT session.  Would I rather eat out for ease or would I rather invest in having fun in the gym?  Put that way it’s much easier to go with investing in someone who is totally focused on helping me achieve my goals (and who makes me laugh a lot) rather than a nice snack!  Or if I only have one take away coffee this week rather than 4 I can buy several currant bushes or packs of seeds for the garden!

What tricks do you use for breaking some not so great habits and avoiding money leakage?

I wasn’t able to get to the London march but did spend a couple of hours on Twitter yesterday joyfully signal boosting tweets about turnout, pics of people attending and the amazing creativity of the signs from the quintessentially British “Really Rather Annoyed” and “I’m Quite Cross” to Ian McKellen’s sign of Capt Pickard with his head in his hands tot he more serious

and the funny ones! 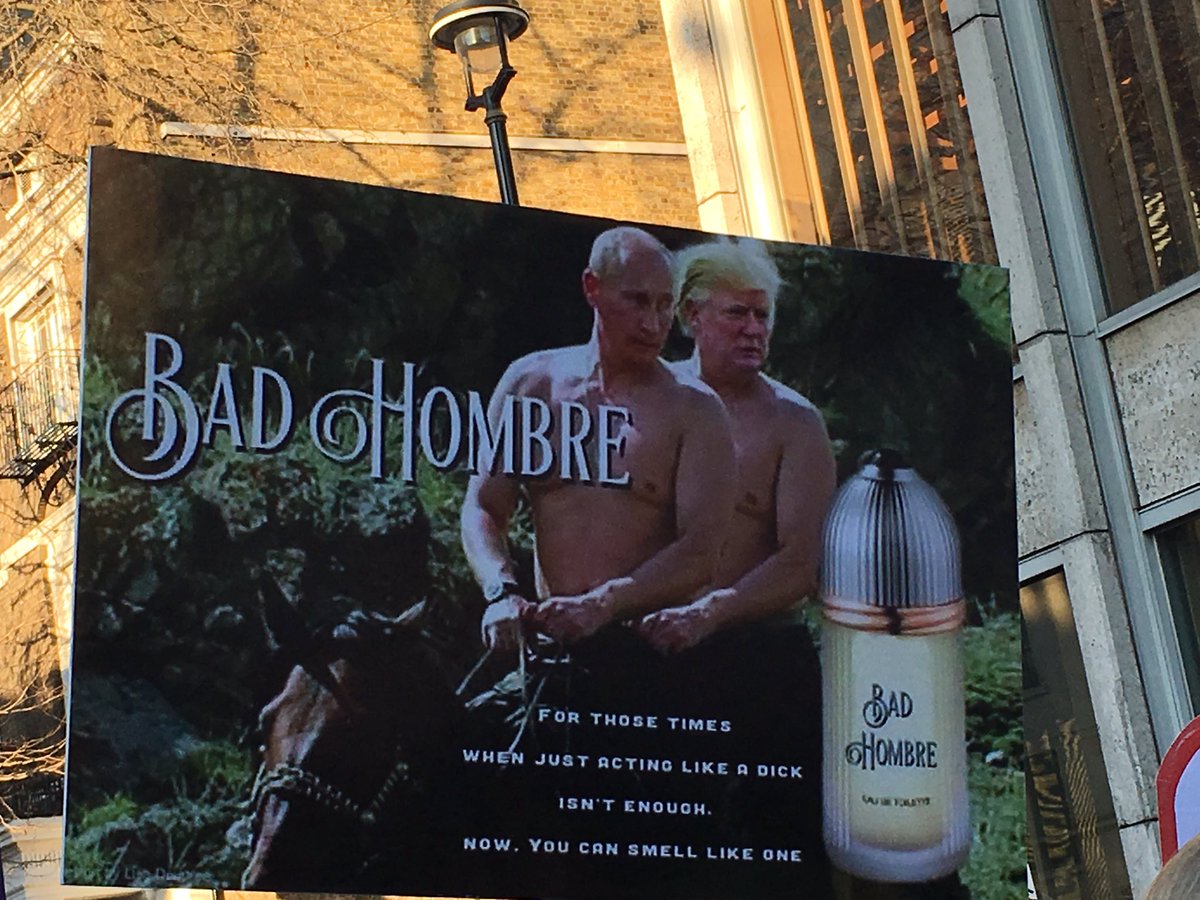 to the signs different groups hung over key London bridges 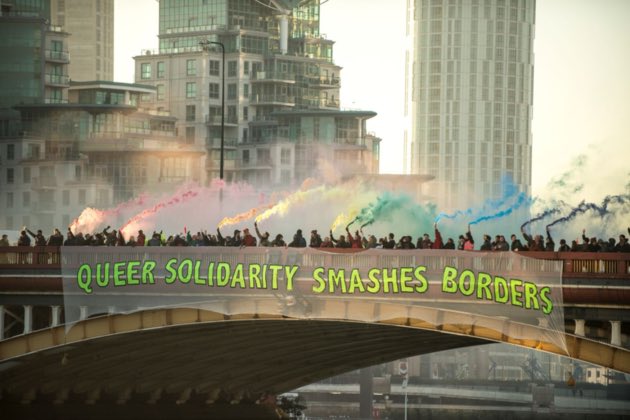 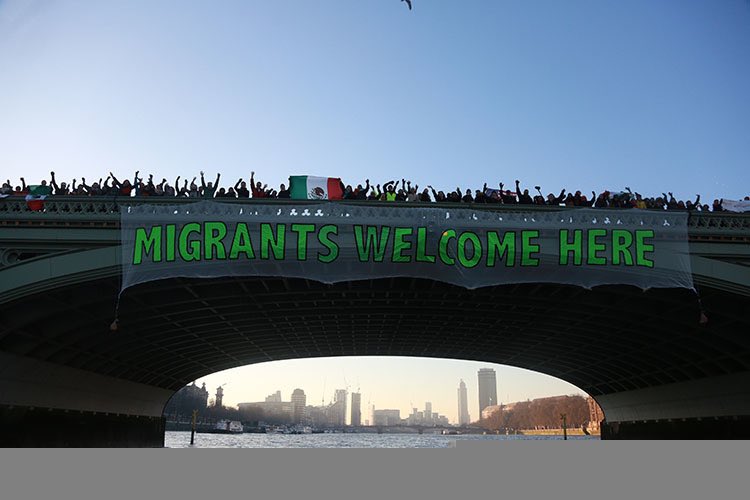 It was wonderful to witness the increasing size of the crowd, and realize the size of the protest when tweets came in about Trafalgar Square being full and people still queuing to join the march at Grosvenor Square.   Friends in Sydney and Melbourne sharing pics of their marches, pictures from marches in cities in Africa and India too  all started to give me hope.

Hope has been sadly lacking since before June when our politicians started using the vile rhetoric of hate and nationalism – I don’t want to return to the 30’s – we al know how well that worked out for the world.

And then the American reports started to come online and OMG!  So many cities, so many people, streets packed and people not able to march because there were so many out there. From Anchorage in sub zero temps to Arkansas and Texas, New York, LA, Denver, Chicago -city after city after city – people were there. And DC – crowds which put the inauguration attendance in real perspective.

I’m taking that hope and proof and hanging onto it and using it to galvanize my own actions. Combining practical local activism with identifying groups I want to support financially both at home and overseas (ACLU and Planned Parenthood make that list as they’re going to need all the help they can get over the next four years).

So to the people who marched yesterday and the one who signal boosted on social media and blogs yesterday.  Thank you – onwards and upwards!

All about my garden and garden related things

Make money, save money and live the life YOU want

Learn how to make money, save money and manage money better

Paying off debt and living frugally

Giving Up the Good Life

When finding your dream house isn't just happy ever after

'obbitry of the horticultural kind

Grow Your Own Veg Blog. Gardening and Food Blog.

Down on the Allotment

Life at No.27
My little allotment

Plot 9A in lincolnshire

EARLY DAYS OF A BETTER NATION

A blog about allotment life with kids

Gardens By The Tay

Hurtled to 60 many years ago, now hurtling towards 70. Retired and enjoying the garden and my allotment - Plot 52A.

back to her roots
Much More With Less

The Allotment of a 20-Something Girl
A Whole Plotta Love

Allotment life and notes from the Boater's Garden

For all who appreciate the beauty of words, flowers and homecooking

The Garden Gate is Open

The Quest for Veg

ruminate vb. to chew (the cud)

Life, Nature and the Garden

My gardening year at work and home.

The journey of a savvy, environmentally friendly allotmenteer gardening organically at 900 feet above sea level.

Look what I dug up today

Excavating all manner of things in a London allotment

Beyond the borders ... an adventure into allotmenteerig.